Over the last two months, Mums in the Know – the No. 1 local network for mums – has been hosting its awards across the UK.  After receiving over 3,000 nominations and 15,000 votes, the network of readers has decided on its favourite local activities for children and A-Star Sports has won four awards in key territories across Chester & Edinburgh.

MITK Chester’s Local Star award highlighted the talents of Gary Bassett, co-founder of specialist multi-sports provider  A-Star Sports and the owner of the local Chester franchise, through a number of parents’ nominations showcased via the Mums in the Know (Chester) website:

“My daughter lacked confidence in sport lessons at school and so we joined A-Star Sports in the hope that she would become less fearful. Since then, she has developed a love for playing team games and that is all thanks to Gary. She may not have the most natural ability when it comes to sport, but due to Gary’s patience and commitment to EVERY child, she loves sport where once she didn’t, and this has given her skills for life.”

“Not only do Gary and the team provide fun and enjoyable classes and holiday clubs, but they give so much back by providing free sports at local events and fundraisers.”

“The groups they run are amazingly good fun whilst keeping the young people fit and healthy. Gary is AMAZING with the kids, he builds a fantastic rapport with them. He’s very generous with his time and donates time to school fairs and the like to encourage health and fitness in children.”

Gary Bassett said: “It’s so rewarding to have our coaching highlighted in such a positive way and means a great deal that people have taken the time to vote and given such amazing feedback, too.  All our coaches are passionate about what they do and we take a lot of pride in making physical activity and sport as fun, accessible and enjoyable as it can be.” 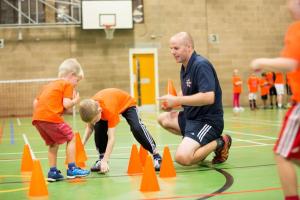 Having worked as an HR Director, Gary changed career in his mid-30s to pursue a dream of sports coaching for children. In 2011, he co-founded A-Star Sports nationally.  In and around the Chester area, A-Star Sports employs 10+ coaches in both full- and part-time roles, delivers weekly classes to over 600 children and provides 250+ parties and 3,000+ holiday club sessions each year.

The awards have highlighted the talents of Brian Droudge, owner of two A-Star Sports franchises, through a number of parents’ nominations showcased via the Mums in the Know (North Edinburgh) website, which included being a finalist in a third category – MITK Local Star.

Brian said: “We’re absolutely thrilled to receive such high praise from our customers and have families take the time to vote for us and make such amazing comments on our coaching.  All of us in the Edinburgh team really love what we do and, for us, influencing children’s development on a weekly basis gives us a great buzz, job satisfaction and a very positive feeling about the work that we do.” 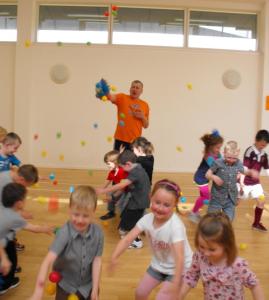 Having left school at 16, Brian spent the next 15 years working for large life assurance companies. He also played semi-professional football from the age of 18, as well as managed and coached at various clubs. He has now been coaching physical activity and sports to primary aged children for over ten years and has a great pride in seeing their skills and love of sports grow and develop.

For more information and to contact a local franchise, please use the form below: