PRESS RELEASE: Reaching for the stars in Chester & surrounding areas – sports in the park, sleeping better and eating parsnips

Local sports coaching company A-Star Sports ran an innovative campaign during the school holidays to encourage children to make healthy lifestyle choices, from their diet and drinking plenty of water to being physically active, getting a good night’s sleep and more.

To launch their campaign the coaches gave out 700 star reward charts to children aged between 3 & 11 who regularly attend their activities in and around Chester, with several hundred more to families from the local community who accessed the free resources via their website.

The initial idea was for children to gain stars on their reward chart for physical activity and healthy living choices during the school holidays, such as through playing sport, helping with household chores, eating fruit and vegetables as part of their meals or even trying new foods.

Adding extra motivation for gaining the stars, the company promised to reward those that returned their completed charts to a coach early in the New Year by entering them into a draw for prizes. The top prizes included two dodgeballs signed by the England men’s and women’s dodgeball teams – both reigning European champions. Runners up received drinks bottles and wrist bands for their efforts.

The two first prize winners (pictured) are William Yeoman (aged 11) who has been attending classes with his coach Gary Bassett since he was two years old and even had the chance to be a ball returner at the European dodgeball championships in 2013 and Ella Shaw (aged 8) with coach Alastair Ross. 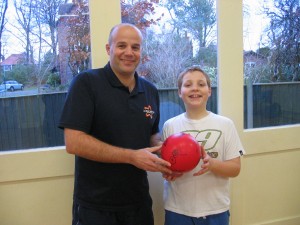 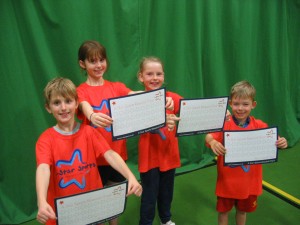 Gary Bassett said: “The commitment and effort shown in completing the star reward charts was amazing. Most children are familiar with the concept of reward charts but were really enthused by our new twist on how to achieve stars.

“The children and their families took part in over 70 different activities from football, basketball and rugby through to climbing, rollerskating and cyclocross. They tried a variety of different fruits and vegetables and positive adjustments to their family lives. One pre-schooler reported to me, ‘I walked around the walls of Chester, walked around Chester Zoo, walked up to the cliffs at Loggerheads country park, made a snowman and had a snowball fight, scootered to the park, went swimming, knocked down the snowman and collected sticks to make it into a snow hedgehog. And, I tried a parsnip on Christmas day!’ And that’s what it’s all about.” 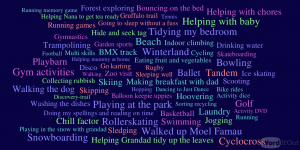 Whilst hundreds of children aimed to achieve at least 30 stars in order to have fun, keep active and try new things, some of the participants recorded an achievement of over 90 stars in just a two week period.

Parents have been delighted with the outcomes:

“We had good fun over the holidays working hard to earn stars. This was a brilliant idea and we enjoyed finding different ways to fill in our chart. We even started filling in a second chart and my son has become very helpful around the house!” (Caroline Hodkinson)

“Many, many thanks for the Star Chart Challenge. What a fab idea! We were having great trouble getting our three year old daughter to sleep. My son was filling some stars in when he suggested that his little sister would be able to colour in five stars if she went to bed without a fuss and with no waking up. It worked! The next evening she got four stars, then three and we haven’t looked back since. Thanks from us all for the now very peaceful nights.” (Emma Abbott)

Research suggests that children are ‘primarily motivated by pleasure, play and the sheer joy of movement’, so providing more opportunities to experience these, like the Star Chart Challenge, can help to cement positive habits that inspire the whole family.

The reward charts and other resources can now be used throughout the year and are available for free on the company’s website for all families to use whether they are a customer of A-Star Sports or not.