A-Star Sports steps into the millions

As one national team, the amazing young ‘stars’ in Chester, Flintshire, Wirral, Wrexham and Edinburgh marched their way to an unbelievable ELEVEN MILLION FOUR HUNDRED AND SEVENTY ONE THOUSAND AND FIFTY steps with their A-Star Sports pedometers – more than double the target set for them.

A-Star Sports co-founder and director Sharon Bassett said: “This is just fantastic. We thought five million steps was a big ask – but it just shows how fitness can motivate people to achieve things of which they wouldn’t have thought themselves capable.”

The Step Challenge was set up to help local children who already join enthusiastically in regular weekly classes to take the same passion for being active into the Christmas and New Year holidays.

And by smashing through the 11 million barrier, many youngsters were rewarded with places at A-Star Sports’ holiday clubs (local terms and conditions apply).

Sharon explained: “The children who recorded the closest number of steps to the coaches taking part each won a prize of one full session, or its equivalent, at one of our holiday clubs. The best example that we can give to the many children that attend our classes is that grown-ups can join in and have a lot

of fun being active, too!”

In their ‘Help stop childhood obesity before it starts’ publication , the NHS states that ‘if we carry on as we are, 90% of today’s children could be overweight or obese by 2050’ and likely to face a financial cost to the NHS and the wider economy of £50 billion by the same time. As a result, and following evidence from the Government Office for Science’s Foresight Report, the government is tackling five key areas, including ‘Children: healthy growth and healthy weight’ and ‘Building physical activity into our lives’.

Similarly in the ‘Growing Up in Scotland Study’ , new findings show that amongst six year old children in Scotland 31% have high screen time on a typical weekday (defined as three hours or more of TV / computer time), 9% are obese and 22% are overweight (including obese). The Physical Activity & Health Alliance (PAHA) has also developed resources to support a diverse range of practitioners – including sports coaches – to introduce health behaviour change, such as ‘Raising the issue of physical activity’ and ‘Raising the issue of Child Healthy Weight’ .

Working with children within the targeted 0-11 years range, A-Star Sports is in a prime position to help children to develop good life habits that will significantly improve their health into adulthood. Whilst the average person walks between 3,000 to 4,000 steps every day, an adult weighing 70kg (about 11 stone) can actually burn about 440 calories by walking 10,000 steps briskly and making it fun from the start sends the important message that festive fun can also mean getting active fun. 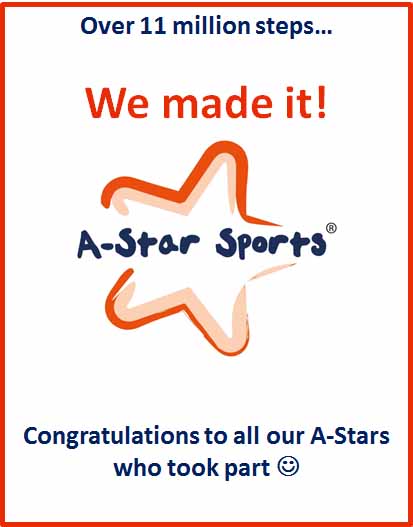